On 2 June 2012, the iwi of Raukawa assembled at Aotearoa marae to participate in the signing of the Deed of Settlement of the Raukawa historical treaty claims.

For many, the signing of the Deed was the culmination of the aspirations of Raukawa kaumātua that lodged the original iwi claims in the Waitangi Tribunal in 1989.  These claims led to two decades of working towards finalising an enduring settlement that recognised the loss, heartache and pain suffered by the whānau, hapū and iwi of Raukawa because of Crown breaches of the Treaty.

To others, the day meant being a part of an event that shaped the future of the iwi.

After the formalities, the iwi was then invited to sign the Deed of Settlement.

When all the marae had signed the Deed, Minister Chris Finlayson and Vanessa Eparaima then signed.

The signing of the Raukawa Deed of Settlement closed a chapter in the long history of the iwi of Raukawa and opened a new one.  The day heralded a new way forward for the iwi as the iwi began to heal from the wrongs of the past.

The whaikōrero that followed emphasised the importance of the day to the iwi. A poignant moment during the pōwhiri was the laying of a greenstone mere, named “Raukawa” by Ngāti Korokī Kahukura, Karaitiana Tamatea, upon the Maraeātea.

As Paraone Gloyne strode across the marae to retrieve the gift, he carried with him the humble Raukawa tree, which he presented to Ngāti Korokī Kahukura in reciprocation.

This was a humbling exchange, one deeply felt by all present.
Following the pōwhiri, all the iwi mingled keenly awaiting the arrival of the Crown. Shortly after 11:30am, the Crown arrived at the gate.

Minister of Treaty Negotiations, Chris Finlayson stood with his parliamentary colleagues Louise Upston and Denise Roach and his staff waiting for the karanga. Next to him stood the Ariki Sir Tumu te Heuheu of Tūwharetoa. Advancing on the visitors were the kaiwero led by Paraone Gloyne, expertly utilising the newly gifted mere, “Raukawa”.

The marae erupted as the fierce chant of the “Haka a Wairangi’ pierced the still air. The visitors moved forward with the Ariki and the Minister taking their seats upon the mahau of Hoturoa.

Following the pōwhiri, the official signing ceremony began with karakia led by Rev. Ngira Simmonds with an opening address by Basil Pakaru, “koroua of Raukawa”.  The address was originally to be given by George Rangitutia, but due to illness was not able to be at the celebrations.  As a mark of respect, Minister Finlayson immediately went to visit George Rangitutia in hospital after the signing.

In his opening statements, Pakaru acknowledged the contribution of Rangitutia to the “…realisation of our iwi dream”.  He went on to also acknowledge the contributory work of all those that had worked upon the Treaty claims, including kaumātua, claimants, previous treaty claims managers, lawyers and past and present Treaty teams.

Following Pakaru’s address the Minister, Chris Finlayson stood before the people.  The Minister reflected upon the special relationship that he had developed and fostered with Raukawa over the years.  He said that the relationship began when he was a speaker for the opposition.  He recounted having dealt with the Raukawa team and said “Raukawa had taken a very innovative and pragmatic approach to its Treaty settlements” .   Humbly, the Minister went on to deliver the Crown’s apology to Raukawa for having caused Raukawa hurt and pain because of the Crown’s breaches.

Vanessa Eparaima, Chair of the Raukawa Settlement Trust, delivered the final address.  Eparaima acknowledged the relationship between Raukawa and the Crown and highlighted the importance of maintaining strong relationships.  It was with solemnity that Vanessa was able to draw upon the example of Nanny Kahurangi Te Hiko in accepting the Crown’s apology on behalf of the iwi. 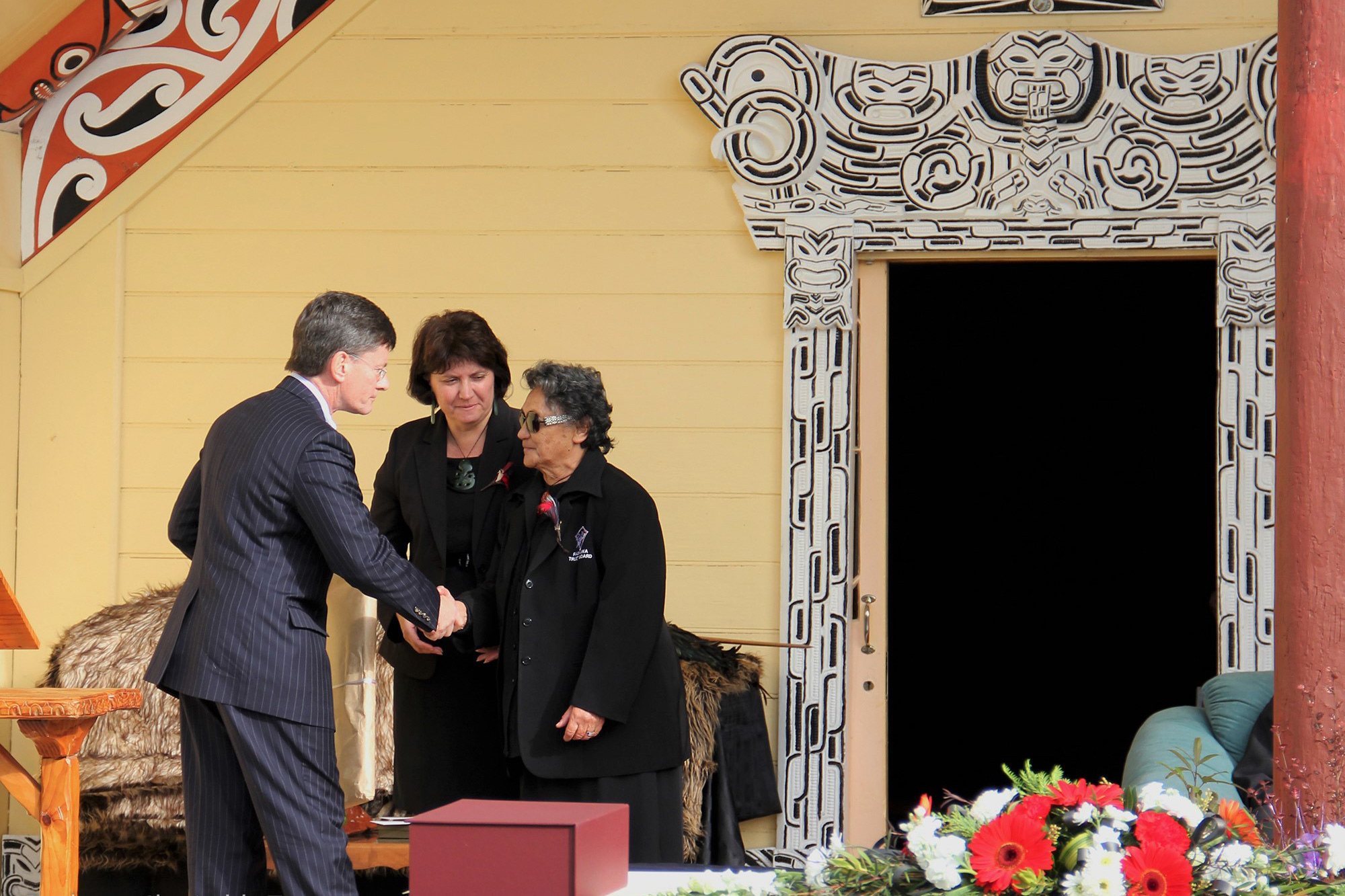 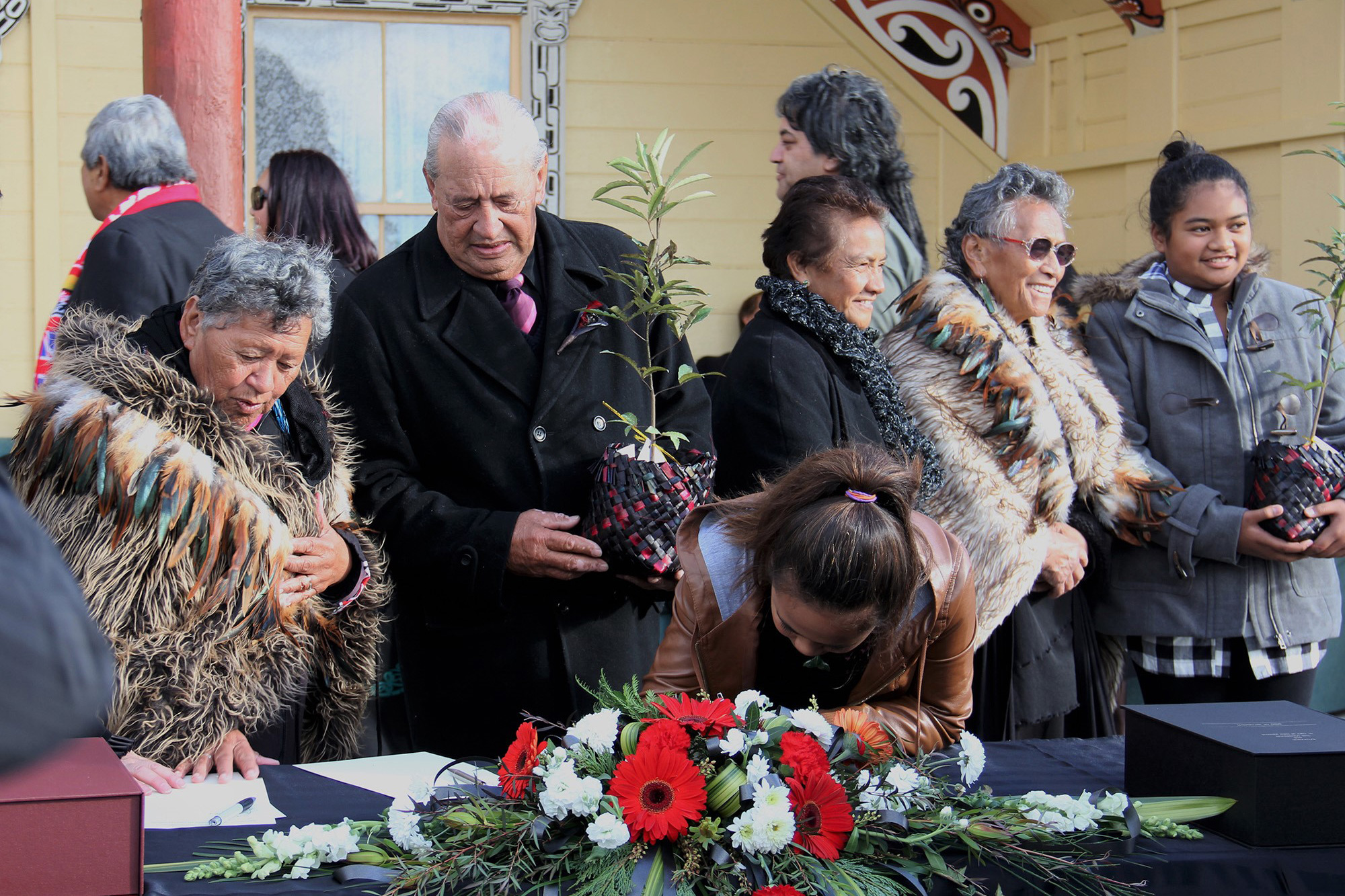 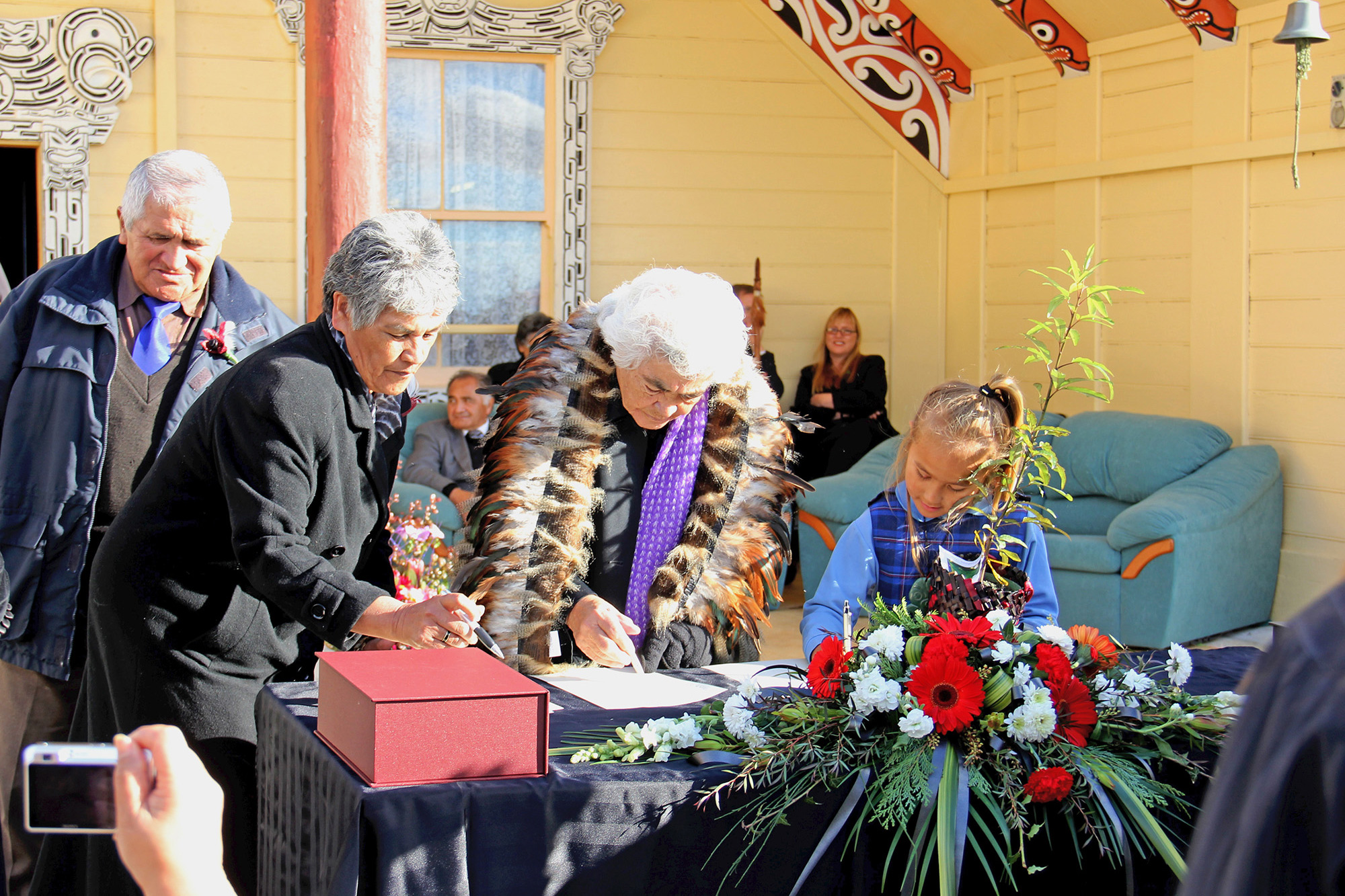 The Passage of Legislation

Above image: Raukawa representatives on the steps of Parliament

On 2 July 2013, the Raukawa Claims Settlement Bill was introduced to Parliament. This began the passage of the Bill that would enact the agreements made in the Raukawa Deed of Settlement into law. A month later, on the 6 August, the Bill had its first reading in parliament.

A small group of kaumātua, trustees and staff sat in the Speakers Gallery in the debating chambers of Parliament to witness the event.

Minister Finlayson moved that the bill be read for a first time and that it be referred to the Māori Affairs Select Committee for hearing of public submissions.

On the 14 October 2013, Raukawa submitters to the Māori Affairs Select Committee faced what they described as “a crucible of fire” as they gave evidence before the committee.  Held in Tokoroa, the Select Committee heard evidence from Raukawa and others regarding the passage of the bill.

Joining the Raukawa team was Mayor Neil Sinclair, who on behalf of the South Waikato District Council, submitted their support for the passing of the bill.

Having heard all the submissions, the Select Committee made few changes to the bill before referring it back to Parliament for its second reading.

On the 19 February 2014, the Raukawa Claims Settlement Bill came before parliament for its second reading.  Minister Finlayson moved that the bill be read a second time.  This was voted on and passed.

A month later, on the 5 March 2014, the team received notification that a space had come clear within the parliamentary calendar and that there was chance that the bill could be scheduled to fill that space in a week’s time if Raukawa wanted it.

The team knew that opportunities like this did not happen often and that not taking up that option would mean further delays to the finalisation of our bill.

The third reading was again opened by Dame Tariana Turia.  She noted the Crown’s attacks on the spirit of Raukawa, and yet despite those attacks Raukawa as a people thrive today.

Denise Roche (Ngāti Huri) spoke of her connections to Raukawa and of her pride in how her iwi achieved settlement a sentiment shared by Louise Upston (MP, Taupō) who spoke of Raukawa being the “heart” of her electorate.  Minister Finlayson lamented short-sightedness of the Crown and how its early engagements with Raukawa had had devastatingly negative impacts upon the iwi.

Following the debate, the bill was put to a vote and carried. 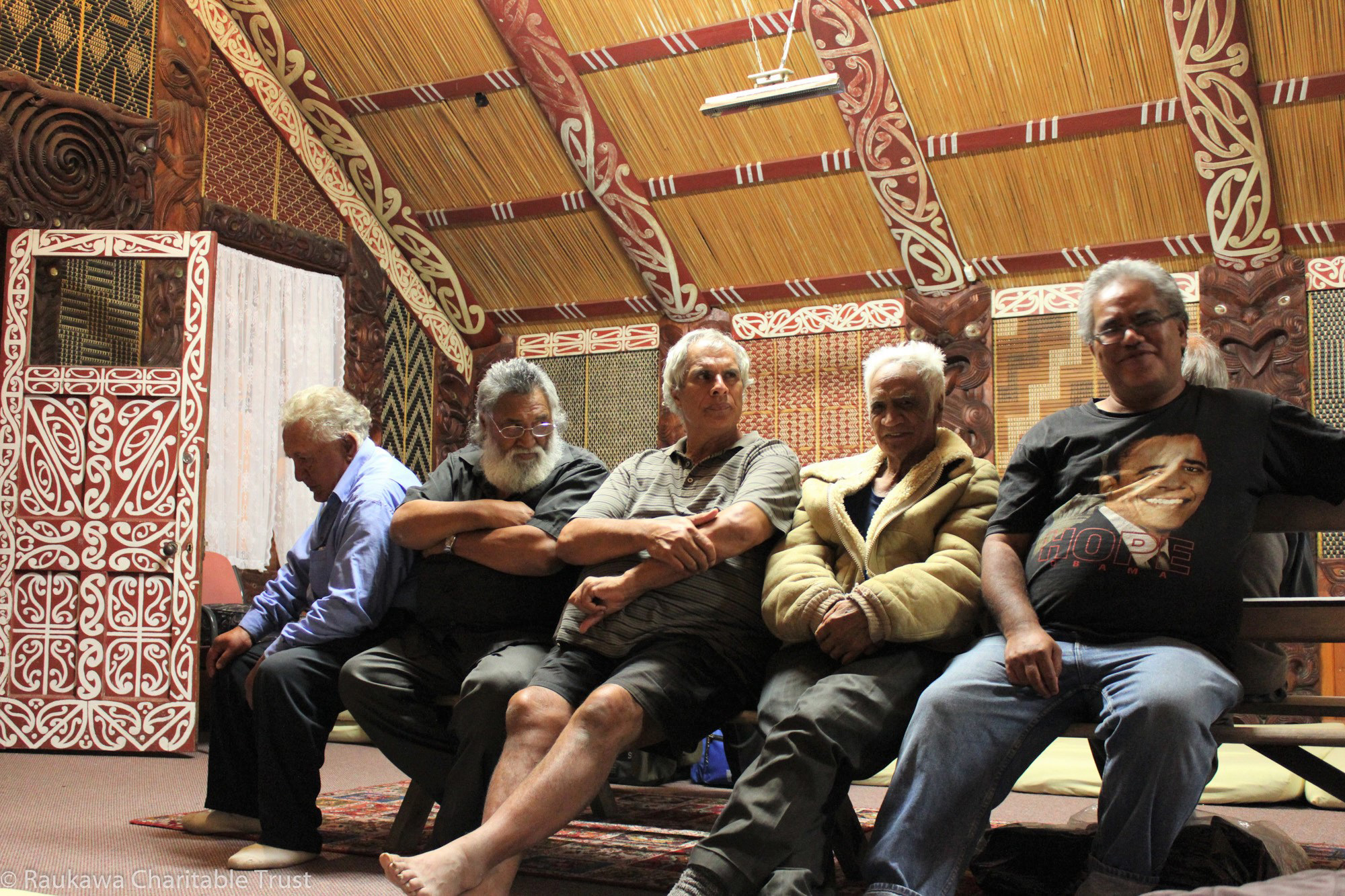 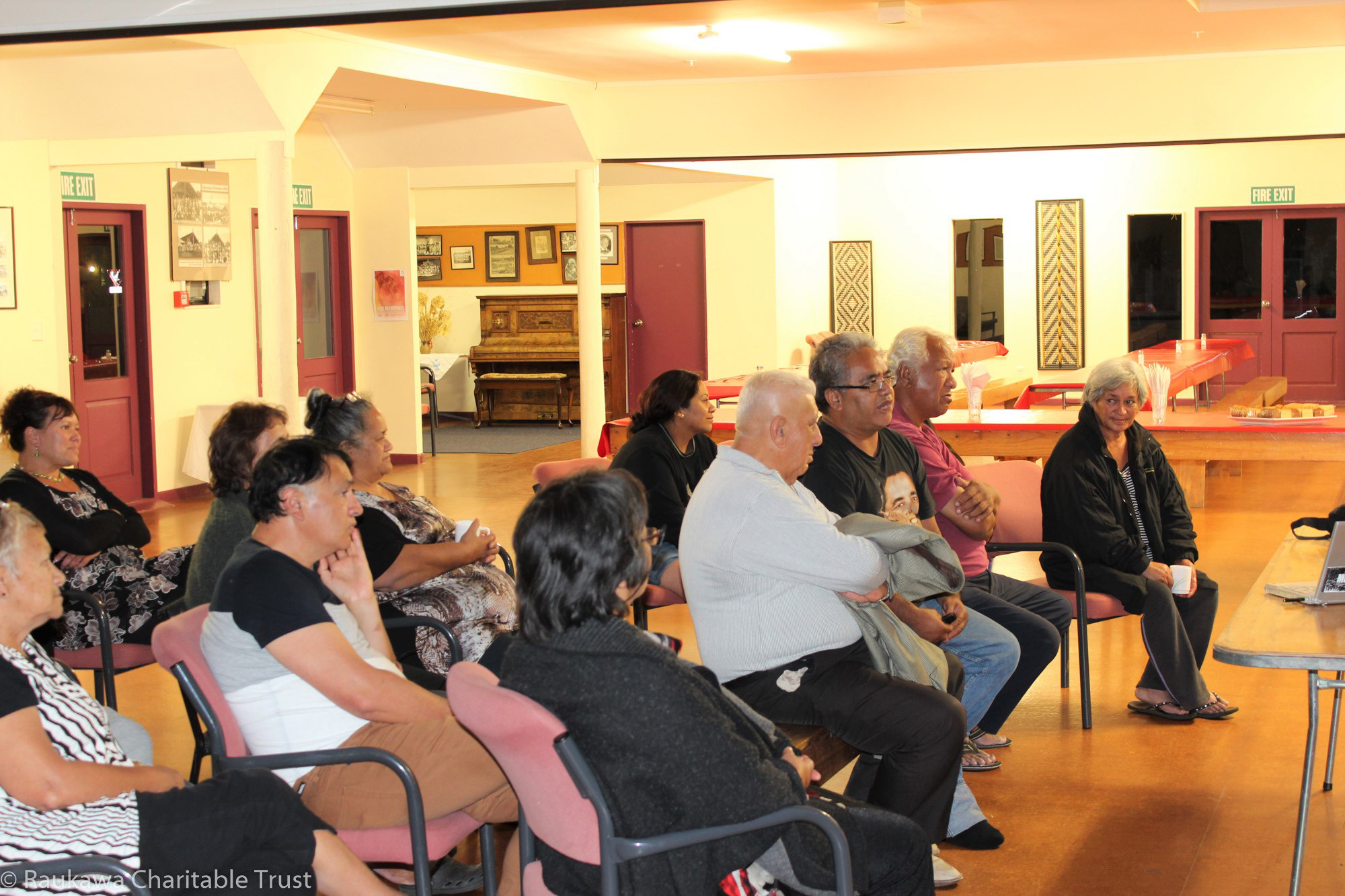 The Raukawa Settlement Trust would like to thank the following individuals and organsiations for their contirbutions in creating and telling the story of Te Tai Whakaea.